These fudgy S'mores Brownies are the ultimate summer dessert. An easy graham cracker bottom, a homemade fudgy brownie layer, topped with marshmallows and milk chocolate pieces complete this over the top brownie recipe that everyone is going to go crazy for!

S'mores are the summer dessert that everyone can't wait for. Melted chocolate, gooey marshmallows and sweet graham crackers are a combination that is pure bliss with every bite.

If you love S'mores as much as my family does, you will love this other favorite recipe: No Bake S'mores Bars!

Why We Love These S'mores Brownies

What better way to enjoy S'mores than in brownie form? Decadent s'mores brownies are a must try for any s'mores or brownie lover!

How to Make S'mores Brownies

How to Store S'mores Brownies From Scratch

Storing: These S'mores Brownies store best at room temperature tightly covered. They'll last up to 5 days, but I'm assuming they'll be gone the day you make them!

Freezing: These brownies freeze best when they are individually wrapped in plastic wrap and then placed in a freezer safe air tight container or zip top bag. Freeze up to 4 months.

Thawing: Remove brownie from freezer, unwrap and let thaw on the counter for at least 30 minutes.

Tips for the Best S'mores Brownies 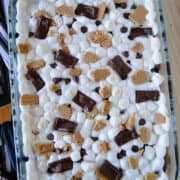