This Mexican Brownie Skillet Recipe creates the most fudgy and chocolatey brownies that have a pop of flavor from cinnamon and cayenne pepper. A rich and decadent treat that is incredibly delicious!

These brownies are a simple and satisfying dessert. Baking them in a skillet creates perfect crisp edges with a fudgy center that will keep you going back for more! If you've never tried Mexican Brownies, this recipe is a must try!

How to Make Mexican Chocolate Brownies in Skillet

How to Store Mexican Brownies

If there are any brownies left, store them in an air tight container at room temperature. The brownies will stay fresh and fudgy for 1-2 days, but will last up to 4 days. 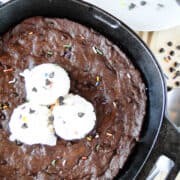