This recipe for Pumpkin Cupcakes is the only one you'll ever need. These cupcakes turn out tender and soft every time. Top them with some sweet Cinnamon Cream Cheese Frosting and you'll be in heaven!

Tis the season for pumpkin everything. And I mean everything! I just bought pumpkin spice coffee for the hubby and he is in heaven. He loves anything pumpkin, I'm not as huge of a fan as he is. I'd rather have chocolate or cookies. His love for pumpkin runs deep though, almost as deep as his french fry addiction and his love for peanut butter and chocolate. I fancy him and make all things pumpkin this time of year, and these cupcakes did not disappoint. These cupcakes are sweet, tender and incredibly soft. A perfect texture for any cupcake. I switched things up and topped them with a cinnamon cream cheese frosting and it took these cupcakes to the next level. Chad also loves my Coffee Cupcakes with Mocha Buttercream!

For this recipe you want to purchase 100% pure pumpkin puree, it has no added ingredients. Whereas Pumpkin Pie Mix is already blended with a sweetener and spices.

Does anyone else eat their cupcakes like a sandwich or is it just me?

How to Make Pumpkin Cupcakes from Scratch

Preheat the oven to 350° and line muffin/cupcake pan with paper liners. This recipe makes 24 cupcakes.

In a mixing bowl, beat together the pumpkin, eggs and canola oil until creamy. Then add the remaining ingredients and mix until everything is incorporated well and the batter is smooth.

Fill the cupcake pan liners ¾ full. The easiest way to do this is to use a large scoop or ¼ cup measuring cup. Bake the cupcakes for 16-20 minutes until a toothpick inserted in the center comes out clean.

Let the cupcakes cool for 5 minutes in the pan then remove to cool completely on a wire rack or counter. Once totally cooled frost with Cinnamon Cream Cheese Frosting.

How to Make Cinnamon Cream Cheese Frosting for Pumpkin Cupcakes

To make the frosting beat together the butter and cream cheese until smooth. Add the cinnamon and 1 cup of the powdered sugar and beat until mixed well. Keep adding the powdered sugar, 1 cup at a time, alternating with the milk. Once everything is all incorporated, bump up the speed of the mixer and beat the frosting for 1-2 minutes until creamy and airy.

To frost the cupcakes you can do it the old fashioned way with a butter knife or offset spatula. Or you can use a large or medium scoop, and place a scoop of frosting on the cupcake then use the back of a spoon or offset spatula to spread it to the edges. To make them a little more pretty, add the frosting to a piping bag or zip top bag with your favorite tip. Pipe in a circle starting from the outside edge working inwards in a circular direction.

How to Store Leftover Cupcakes

The frosting has cream cheese so it can spoil, so the cupcakes should be kept in the refrigerator when not being served. The fridge can dry out baked goods and nobody wants to eat a hard, dried out cupcake so I would only store them in the fridge for a day or two.

Try these sweet and tender Pumpkin Cupcakes with a Cinnamon Cream Cheese Frosting this season and let me know how much you enjoyed them in the comments below! Pictures encouraged on Instagram with the hashtag #heathershomemadekitchen You can also follow me on Social Media to see what other crazy things my family and I are doing! If you like what you see, please share with your friends and family!

Don’t forget to pin the recipe for later! 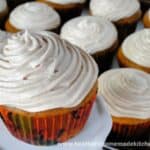 This recipe for Pumpkin Cupcakes is the only one you'll ever need. These cupcakes turn out tender and soft every time. Top them with some sweet Cinnamon Cream Cheese Frosting and you'll be heaven!
Course: Dessert
Cuisine: American
Keyword: Cinnamon Cream Cheese Frosting, Pumpkin Cupcakes
Prep Time: 10 minutes
Cook Time: 18 minutes
Plus cooling and frosting: 1 hour
Servings: 24 cupcakes
Author: Heather