This Baked Pumpkin Donuts Recipe creates fluffy and flavorful donuts that are topped with a cinnamon buttercream glaze. An easy donut recipe that is great for dessert, brunch or a sweet snack!

My family loves everything pumpkin, so it was only natural for me to create a donut recipe. Who doesn't love a good donut? These pumpkin donuts are incredibly easy to make with just one bowl. Plus, they're baked which means no oil mess to clean up.

The sweet cinnamon frosting is simple and I have a neat trick to make the frosting into an easy and dippable glaze. Altogether these donuts are a must make for any pumpkin lover out there!

How to Make Baked Pumpkin Donuts

How to Make Cinnamon Buttercream Frosting

How to Make Cinnamon Frosting into a Glaze

How to Store Baked Pumpkin Donuts with Cinnamon Glaze

Storing: Store the donuts in a single layer in an air tight container for 2-3 days at room temperature being careful that the room temp isn't too hot or the glaze could melt into the donuts. Or they can be stored in the fridge for 4-5 days, but the donuts will dry out a bit in the fridge.

Freezing: These glazed donuts can be frozen in a single layer in a freezer safe air tight container for up to 4 months. To the thaw the donuts, thaw them overnight in the fridge. Thawing in the fridge will help keep the frosting from melting further.

Do baked donuts taste the same as fried?

Fried donuts have a little crisper exterior and have a more abundant oil flavor. Baked donuts are more soft and fluffy like a cupcake, but equally delicious as a fried donut.

Are baked donuts healthier than fried?

Both baked and fried donuts contain sugar and fat. However, baked donuts are a bit healthier calorie and fat wise since they won't have the extra oil and fat absorbed from frying. 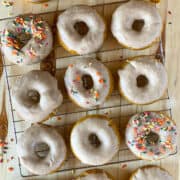