This delicious and sweet Cinnamon Swirl Zucchini Bread is loaded with fresh garden zucchini and cinnamon sugar swirled throughout. It is so dang delicious and a great way to use up some of that extra shredded zucchini!

It is known that I love to make quick breads and muffins, so I have yet again created another bread recipe. This also happens to be another zucchini bread recipe because I still have so much zucchini! I even gave a whole bunch away and I still have so much! So if you still have some zucchini you need to use up try out this recipe. It is so delicious with the best sweetness and spice from the cinnamon sugar swirl. This bread is so great for snacks, breakfast, and packed in lunches.

P.S. It is divine with peanut butter and honey!

Do I have to peel the zucchini before I shred it?

Nope! No need to spend extra time peeling the zucchini. The skin on zucchini is thin enough that it becomes really tender when baked, plus it makes the bread so pretty with all the flecks of green!

What is the best way to shred zucchini?

I shred zucchini two different ways. If I only need a cup or so of shredded zucchini, I’ll grab a small zucchini and shred it with a box grater. However, I often get large zucchinis (because they grow so fast sometimes!) so I’ll get out the food processor and shred a bunch of zucchini at once. I like to do this because then I can make a few extra batches of breads and muffins and freeze them for the kids so they are available for their lunches and snacks.

How to Make Zucchini Bread with Cinnamon Swirl?

Making quick breads are so simple. Gather all your ingredients and great ready for some amazing bread!

First, mix together the wet ingredients in a stand mixer or with a hand beater. Start by beating the sugar and eggs until smooth and creamy. Then, add the oil and vanilla and beat until well mixed.

Next, add the dry ingredients. Add the flour, baking soda, baking powder, salt and cinnamon. Mix just until incorporated. Now fold in the zucchini and spread only half of the batter into a 9x5 lined loaf pan.

Lets make some cinnamon swirl! In a small bowl, combine sugar and cinnamon and mix until blended. Evenly spoon the cinnamon sugar over the batter in the pan. Top off the pan with the rest of the batter.

Makes some swirls! Using a butter knife or chop stick, swirl the batter to mix the cinnamon sugar mix into the bread.

Bake the bread in a 350° oven for 55-65 minutes and until a toothpick inserted in the center comes out clean.

How do I freeze Cinnamon Swirl Zucchini Bread?

Double the recipe and make a loaf for the freezer! To freeze the extra loaf, let the bread cool completely. Wrap the bread in plastic wrap and place the bread in a freezer safe container or zip top bag. Don’t forget to label what you are freezing and date it.

What can I do with all my extra shredded zucchini? Freeze it!

Shred extra zucchini while you have the food processor out and then freeze it. You will have shredded zucchini available all year long so you can make all your favorite breads and muffins. After the zucchini is shredded, I put it in a paper towel lined colander so the towel can absorb some of the excess water from the zucchini. I like to freeze my shredded zucchini in 2 cup portions. Measure out 2 cups and place it in a quart size freezer safe zip top bag. Then I stack all the bags flat on a baking sheet and place it in the freezer. I like the bags to freeze flat because they will store easier in the freezer and there is no wasted space.

Give this deliciously sweet Cinnamon Swirl Zucchini Bread a try and let me know what you think of it in the comments below! Pictures encouraged on Instagram with the hashtag #heathershomemadekitchen You can also follow me on Social Media to see what other crazy things my family and I are doing! If you like what you see, please share with your friends and family!

Don’t forget to pin the recipe for later! 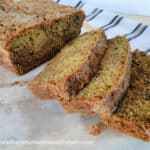 To freeze: let the bread cool completely. Wrap the bread in plastic wrap and place the bread in a freezer safe container or zip top bag. Don’t forget to label what you are freezing and date it.